They said it couldn’t be done…

Back in April of 2019, Microsoft announced a change to ASP.NET Core’s Startup class as a result of migrating the platform to the Generic Host model. A few weeks later, somebody noticed this means you can’t do logging during Program.Main or Startup.cs:

Using the generic host builder, how do you log?…

…logging is built on dependency injection, and ConfigureLogging is just a wrapper for ConfigureServices. It’s not possible to log until after all of the services have been registered and the container has been built.

The discussion is pretty long (and isn’t entirely logging-focused), but suffice to say there isn’t a good solution. Worse, like many things in today’s .NET, this is bigger than just ASP.NET – the limitation applies to any Generic Host -based application. On another project I’m doing a huge amount of work with hosted headless services, so I see this as a real problem. I decided to try doing something about it.

This is a short article to introduce my solution to this problem. The code is in my repository, MV10/GenericHostBuilderLogger, and the README has everything you need to know to use it in your own application. As I write this, it isn’t packaged on NuGet yet, but that should be coming soon.

As a bonus, it optionally also supports Serilog, because Serilog is too awesome to ignore. (This will be a separate package when I get around to setting up packaging.)

Products like Serilog take the position that a static logger is better than a service-based logger. Quite frankly, this whole concern is a non-issue if you just use a static logger. While I do use Serilog myself, I strongly dislike configuration in code, and in production apps we don’t use that approach. Instead we use the optional IConfiguration-based approach so that logger behaviors can be changed without re-building the entire application. This means Serilog suffers from the same problems as the vanilla .NET logger implementation.

My goals for this solution were:

Ironically, my solution is also basically a static logger, and since the general ILogger interface and extensions are so well-known, my solution replicates a subset of that functionality, supporting the basic Log() methods and related wrapper methods like LogInformation() and LogWarning(). It uses a thread-safe queue as the message cache, and adds some extension methods to make it easy to set up.

But the logger implementation isn’t the interesting part here, it’s what we do with the log messages that is important. The project defines a couple of Generic Host background services to ensure the cache is flushed either at application startup or during a terminal failure event. You can read more about that at the end of the repository README.

The ConsoleTest project in the repository has five variations on Program.Main demonstrating various scenarios, and the same five scenarios are also available in the ConsoleWithSerilog project.

As the name suggests, this is the simplest example when everything goes right. Here we use the most basic registration extension, AddHostBuilderLogger. The program just writes one message to the startup log, then continues normally. After IHostBuilder.Build is called (which is one of the things that happens automatically when you execute RunConsoleAsync), the host fires ApplicationStarted and the background service uses the host’s logger to dump the cached log message.

The console output looks like this. The highlighted entries were cached before the host’s logger existed and were emitted later.

The same output from Serilog (with output produced by the Serilog.Sinks.Console package) looks like this. Instead of calling AddHostBuilderLogger, it uses Serilog’s static configure-in-code approach and calls UseSerilogWithHostBuilderLogger.

This sample throws an exception within Program.Main itself. The vanilla .NET version and the Serilog versions are configured the same way as above.

This time the log begins with a Warning message. This is emitted by our system when the application calls TerminalEmitCachedMessages, which is a request to flush the cache then terminate the application. Further down, you can see the Error-level log reporting the exception message and the stack trace.

The “Successful Run With Config” Sample

The output of this sample is identical to the earlier “Successful Run” example. The difference is in how the Host Builder Logger is set up.

For Serilog, we move away from the static configure-in-code approach and use the optional inline configuration syntax. In a real program, this is where we would apply IConfiguration to set up Serilog with external configuration providers, but to keep the demo simple, we simply repeat what was done earlier in code:

In these cases we add a filter (or “Override” in Serilog terms) that restricts “Microsoft” entries to the Information level or higher. When the application is crashing and the log is being dumped as a result of calling TerminalEmitCachedMessages, the system sets the default log-level to Trace to provide you with maximum details. The Generic Host can output Debug level messages, so applying this filter demonstrates that the intercepted logger configuration is working. We’ll look at this more in the next sample.

The “Basic Exception With Config” Sample

This is similar to the “Basic Exception” sample shown earlier where an exception is thrown from Program.Main. Since this leads to app termination, the logging system changes the minimum log level to Trace. Without the filter added in the previous section, you’d see host Debug messages:

By filtering “Microsoft” messages to Information or higher, we can demonstrate the system was able to re-apply the Serilog configuration delegate on our simplified Generic Host – the Debug messages are suppressed:

The “Exception During Config” Sample 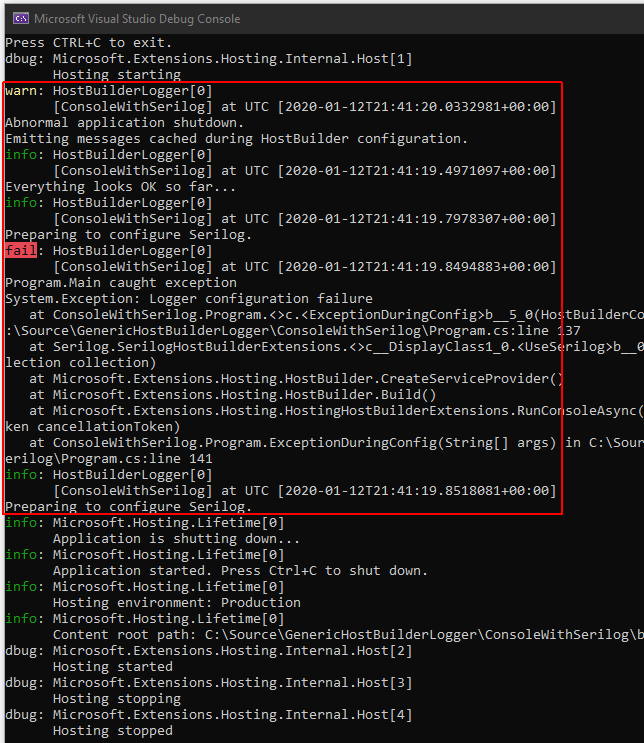 There are several interesting things about this output.

First of all, even though we ran a Serilog-based example, the output is from the vanilla .NET logger. Since Serilog configuration failed, the system uses the .NET logger as a fallback. The .NET logger doesn’t offer many providers, but under Windows, these messages will end up in the Windows Application Event Log, at a minimum: 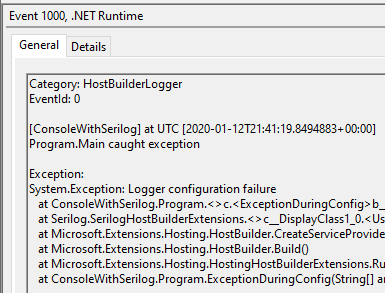 Second, notice the “Microsoft”-prefixed Debug-level messages are back. Again, this is because Serilog configuration failed, meaning our Override setting wasn’t applied to filter out messages lower than the Information level.

Finally, notice the “Preparing to configure Serilog” message is output twice – once just above the red “fail” entry, and again at the bottom of the highlighted area. This is because that log entry is part of our configuration delegate. The first one is the “real” execution while IHostBuilder.Build is running. The second one is when our terminal log-writer is trying to re-apply the intercepted log configuration.

That last bit could be a little confusing, but it sure beats no log output at all!

Ever since MVC rolled around more than ten years ago, .NET developers have been using Startup.cs to configure web-based applications. One of the many reasons I’m not a fan of “conventions” is that they often become defacto “requirements” because few people are aware that they’re just a convention and not mandatory in any way. This is true of Startup.cs – you don’t really need it at all. But virtually everyone uses it, and at first glance, that poses a problem with this implementation.

If you take a look at the catch block in the samples’ Program.Main you’ll find this:

The problem is the await keyword – our venerable Startup.cs is not async-friendly. At one time Microsoft seemed to be planning an async option, but I can no longer locate the issue and that plan seems to have fallen by the wayside.

However, the solution is simple enough – simply throw an exception from Startup and let Program.Main catch it.

Application startup is a pretty important process, and as anyone who has supported real-world applications knows, when startup fails, having good logs available is usually a critical part of troubleshooting the failure. I understand where the .NET team is coming from, but I’m of the opinion that logging is a special case and I’m surprised they aren’t backing down on this one.

This solution is fairly lightweight and very easy to use. Hopefully you’ll find it useful.